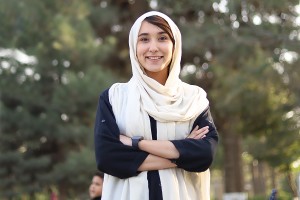 Finding a Sense of Home Again

“When the plane took off from Kabul, everybody was clapping and cheering except for me. I covered my face with both hands and sobbed. And when an old man sitting next to me asked why I was crying, I said I didn’t know I was going to leave my country like this. I did not know when, or if I was coming back.”

This is how Narges Ghaznawi describes her journey to the U.S., which started on August 22 of this year.

Narges longs for her life in Kabul where she diligently worked as an administrative assistant for one of the financial institutions that gave loans to farmers to help them improve their life conditions. In her free time, Narges taught English from American-based curricula, which helped her polish her pronunciation skills, as did whatever American movies she could find. Her dreams of joining the American university in Afghanistan were dashed due to having limited finances. But nonetheless, she saved that dream for later, hoping she could join one of the other renowned universities somewhere someday.

Narges spent her first week on an American base in Germany. Her consolation was helping other refugees. Her English skills came in handy in a way she herself wasn’t expecting.

“Those people spoke only Dari or Pashto and I was able to help interpret for the sick ones, for those who needed me. I felt happy for the first time since I left my home,” she recalls.

Inside the refugee camp, she made friends with other women, listened to their woes, and even encouraged some of them to stand up for their rights. When Narges and her friends saw that some women were being abused by their husbands or male relatives inside the camp, they would report that to the American side. “We educated women about their rights and told them that violence had to stop. Enough is enough.”

Today, Narges is preparing to study architecture in New York after receiving two full scholarships. She is spending her days before college on road trips traveling to different areas in the U.S. She says she is trying to retrieve her “sense of home.”

“I feel I have a good future ahead of me,” Narges excitedly says as she sits on one of the wooden benches outside her home in Haymarket, Virginia. She takes out a driver’s booklet and waits for her relative and other female friends to join. Today, the young women will study for the written driving test, their first step to getting an American driver’s license.